EXIT It is a band of versions born in 2008. It was originally created to be the 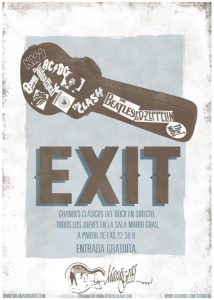 It is a band of versions born in 2008. It was originally created to be the resident group of the prestigious Mardi Gras hall in A Coruña, one of the most important live music clubs in Spain. It is there where he has developed most of his activity, playing every Thursday night and reaping multiple full and legion of fans. It is also worth mentioning its participation in festivals and events such as the Northwest Pop Rock or the Nordestazo of Malpica.

The EXIT repertoire, which currently includes more than 250 tracks, is full of rock classics from different decades of history. All of them anthems that transport the audience to the best times of the great rock bands.

Their sound, pure and refined, has made them one of the best and most reputable bands of current versions, a fact that is backed by the loyalty of an audience that has made them the only survivors of the stable programming in the scene of live music halls in A Coruña.

Many have been the críticas that have left evidence of the good work of the band, some of them included in newspapers such as La Opinión or La Voz de Galicia, or in specialized websites such as empuje.net or Underworld Coruña.

Bowie, Kiss, AC/DC, Rolling Stones, Ramones, Led Zeppelin, Hendrix… are just some of the artists that EXIT brings to the stage in their performances, making them a true ecstasy for any music lover.

The current band consists of Ton Eirín on lead vocals, guitar and harmonica, JC Nogueira on guitar and vocals, Lago Doval on drums and Miguel Suárez on bass and vocals.